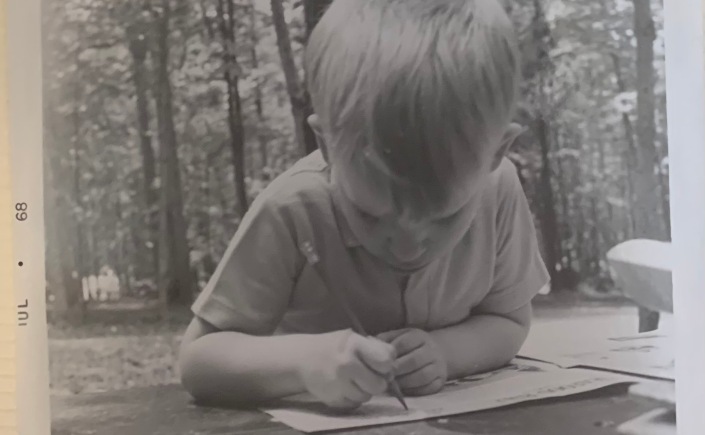 The testimonio was prepared for BBL 7123, “Sociocultural Contexts of Literacy,” University of Texas at San Antonio.

Paulo Freire, for me, constructs in the first chapter of Literacy: Reading the Word and the World (Freire & Macedo, 1987) the model testimonio of learning to read. His pre-literate vision—his renderings of a child’s surroundings in Recife, Brazil—have him noticing “things, objects, and signs” (p. 20) such as birds, trees, the movement of water that, in a dominant view of basic literacy, would not normally be associated with the dawning of the unique human capacity to read and write the word. Freire writes:

The texts, words, letters of that context were incarnated in the song of the birds—tanager, flycatcher, thrush—in the dance of the boughs blown by the strong winds announcing storms; in the thunder and lightning; in the rainwaters playing with geography, creating lakes, islands, rivers, streams. (p. 20)

Unlike Freire, my environment was constantly changing. I was born in Italy, exposed early to multilingualism—my parents, my siblings learned and practiced German and Italian. To this day, the rhythm of spoken Italian makes me feel accepted and lifted into a realm of sociability and warmth. Prominent among the “things, objects, and signs” were the piano that my mother and sister played, teaching me, by osmosis, the regularities of meter; neighborhood children in Tirrenia, Comune de Pisa, who spoke to my uncomprehending self; and shelf loads of books that my mother packed and labeled so they would travel with us to various U.S. Army postings in Japan, Hawai’i, and Washington, DC.

My brother and sisters and parents read to me as an infant and toddler: the Curious George series, involving the man in the yellow hat and his willful monkey; Christmas stories, mostly European; and fables. In my father’s study area, he had compendia of Civil War letters; presidential documents; genealogical research; religious writings; and arcane texts on patents and magic, inherited from my great-grandfather. My mother favored philosophy; world history; Shakespearean drama; and feminism.

More important than any of these, though, were the words and pictures of Peanuts cartoons. It strikes me now how often the Peanuts characters, including the dog Snoopy, are pictured reading and writing. When we traveled by car or plane, we as children were expected to entertain ourselves. That meant, for me, thumbing through the Peanuts paperbacks (like Good Grief, Charlie Brown! You’re a Pal, Snoopy! and Snoopy, Come Home) and learning the characters’ respective literacies: Lucy’s high-voltage screams; Woodstock’s almost cuneiform scribbles; Snoopy’s thought bubbles; Linus’s high-minded idealism and moralizing; and Charlie Brown’s physiologically and discursively experienced self-abasement and world weariness.

Reading was the most esteemed act in our house, such that there were rules controlling reading etiquette and reading time: no reading at the dinner table, no reading past the bedtime hour, no reading of substandard literature like disaster thrillers or romance, no reading in trees (which I sometimes violated). Using Freire’s schema, the word almost seemed to supersede the world. In the morning, for example, the Washington Post newspaper, especially on Sunday, took precedence over most conversation, its contents digested and distributed among family members according to a fixed hierarchy: my parents battling over the front-page and metro sections, my sister looking for the puzzles, while I was content with comics and sports.

In a throwback to my grandparents’ household, my mother had a desk (a secretary) specifically for writing letters, my father a larger workspace for doing income taxes, jotting in electronics textbooks, and cataloging and filing documents he obtained on genealogical excursions. I was proud to write, to make letters, plain and cursive, and my mother evaluated the accuracy of my script. She rigidly enforced standard English. My pronunciation was critiqued. I was not allowed to say “offen,” but the “t” had to be clearly audible: “often.” None of us was English, but the Queen of England was considered the measure of phonological correctness.

One motivation behind providing such vast funds of literacy knowledge and extracurricular instruction was privilege and the maintenance of privilege. Seemingly without conscious intent, written texts were seen, as Kristen Perry says, to “achieve social goals and purposes” (2012, p. 63). In line with Bourdieu’s ideas, the linguistic and cultural capital that each of us possessed was aggressively developed and protected. The way we spoke was a sign of status and authority (Perry, 2012, p. 61). So, unlike Freire, I did not naturally see human formation as a reader and writer as a political act for those coming to voice, but as a tool for perpetuating my superior position. Over the years, I have had to be disabused of this notion, or at least to learn to see the creative and transformational potential among all readers of the world and word, among all literate subjects.

This site uses Akismet to reduce spam. Learn how your comment data is processed.