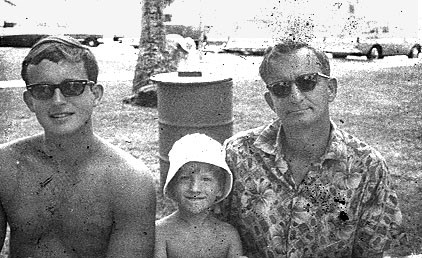 Note: I compiled this essay, with artifacts, while teaching ENGL 103P, “Rhetoric and Composition I,” at Northern Illinois University in fall 2018. I write with students to demonstrate process. In this case, the assignment was a collage, or themed, essay, loosely based on the Readers Write feature in The Sun magazine.

Blood poured from my chin onto my chest. It’s a regrettable thing, to be bleeding, to be bleeding in public. And then not to be aware that you are bleeding. To confront the horrified faces and even screams of people standing around the Schofield Barracks officers’ club pool.

Schofield Barracks is the largest U.S. Army base in the world, or at least it was at the time, in the early 1970s. It’s where I took swimming lessons when I was six years old. Large slices of life in Hawai’i—much less now than in times of the Polynesian seafarers—are oriented around the water. You spend your weekends at the beach: in our case once or twice at Waikiki, near Diamond Head, but usually one of the military-only beaches. Almost all kids’ birthday parties incorporate swimming. It’s rare, or nearly impossible, to live on the islands and avoid encounters with the ocean and its many personalities.

That I was scared of water was one of my biggest sources of shame at that time. My brother was twenty-three years old, a lifeguard, a credentialed endurance swimmer, and my swim instructor. He had just finished almost two years of Army service as a military policeman during the Vietnam War period. My reluctance to get in the pool was not impressing him. I don’t remember what tactics he used to motivate me, to allay my fears, but empathy was not in his pedagogical tool kit. As I took a diving position at pool’s edge, as close as I’ve ever been willing to get to actually trying to dive, he pushed on my rear suddenly with his foot, and I was flailing and inhaling the chlorinated blue.

A rough transition, quite unlike walking over the threshold into a room, but some transitions are meant to be rough. Water baptisms are immediate, shocking; they can be violent, as was the case with this baptism. After being baptized with and into violence, I fairly rapidly overcame my fear and started inventing my own twisting jumps from poolside or a high diving board. During one jump, my chin struck the concrete edge of the pool, almost knocking me unconscious. I stumbled out of the water, letting others see my true baptism in blood.

The short-story attempt started by describing a diving loon, a symbolic presence in a north woods chronicle that went nowhere. Nothing occurred. People said nothing and did nothing. Only symbols emerged. A lake in northern Wisconsin. The loon: a singer and noisemaker, who gets to stay in the territory of her mastery.

That bright, tight forever drum / Could not describe nightswimming

For almost ten summers, I traveled with dog and spouse to a fragmented sand spit on the Gulf of México, vulnerable to hurricanes and tropical storms that hug the western coast of Florida. Swimming is a pleasure in the emerald and gray water, which poses no threats besides jellyfish, red tide, and the occasional shark. Some days it is placid, truly like glass. Our dog was more bothered than we were by the red tide, caused by blooms of toxic red dinoflagellates, such that she could not breathe even on short walks on the sand. She had sneezing fits, pawed her eyes, and pleaded to go back inside.

Dinoflagellates are algae, microscopic. As human beings, we would be unaware of their presence were it not for the night when, if you go swimming, or merely splash your arm around, you see streaks of phosphorescent light emitted by these single-cell creatures. It’s part of the thrill of night swimming that managed to pass me by, as I learned later in letters from one of my former spouse’s older relatives, who had grown up around Tampa. Her relative’s letter embarrassed me. I hadn’t experimented, as she had, with the phosphorescent aspect of the gulf water. I hadn’t been married for fifty or sixty years and learned these nighttime secrets.

Instead, I had walked repeatedly, in a half-mile circle, along the one concrete road on this overbuilt sand listening to a song by Wilco, “Handshake Drugs,” avoiding the fact that my marriage was ending and shutting out everything, including the phosphorescence.

Sandy’s dark, fibrous arms wrapped around my white chest at the swimming pool where I was apartment-sitting for a church friend. Her mother and I belly-laughed afterward, covering our laughs, as Sandy serenaded us on a real piano. She was ten years old, the step-daughter I would never have and the only person to cling to me in order to stay afloat.

Recently I met a woman whose family owns property on Cozumel, one of the islands off the Yucatán peninsula. Before her birth I had swum there, snorkeled, wearing a white T-shirt but otherwise totally exposed to the fusion reactions of a May sun and returned to Maryland and my mundane subdivision to present a white face to the world and a backside with second-degree burns. The purple rouge of the burn turned white when pressed, and pus seeped from the blisters. I couldn’t bend my legs. I didn’t listen to my mother then and her words about sunscreen and limiting my time in the water. I did not then, and do not now, wish to leave a place where I can disappear and shun the air.

I’ll call him Reverend Tom. My last swimming coach. As I struggled through a swim test that I needed to pass in order to check out a canoe in order to fish in order to feel like I was not just a waste of space, running the archery range when the first hire got too stoned or too drunk, mass-producing lunch-bag luminaries, praying without conviction, pretending to teach something from the book of Jonah, about sailors, and saviors at sea, having completed the first half of the first lap doing the recently mastered crawl, then having sucked in a couple cups full of water after the first turn, which always happened, which accelerated my heart rate and probably kept me from drowning, which would have been the ultimate embarrassment, as all this transpired in the deep and dark Rhinelander-vicinity frigid lake water of mid-July, I began side-stroking, back-stroking, breast-stroking, improvising my way to survival and to the completion of two fifty-meter laps that would color in the other half of my swim-test token that I would keep taped to my computer screen for most of the next two decades.

Reverend Tom cried out from the diving deck, “You’re showing me things I didn’t know you knew!” and for a summer or a little while longer I thought I had conquered all fears and cleaned out the last remaining repository of self-doubt.

I didn’t think I would need any more lessons.

This site uses Akismet to reduce spam. Learn how your comment data is processed.